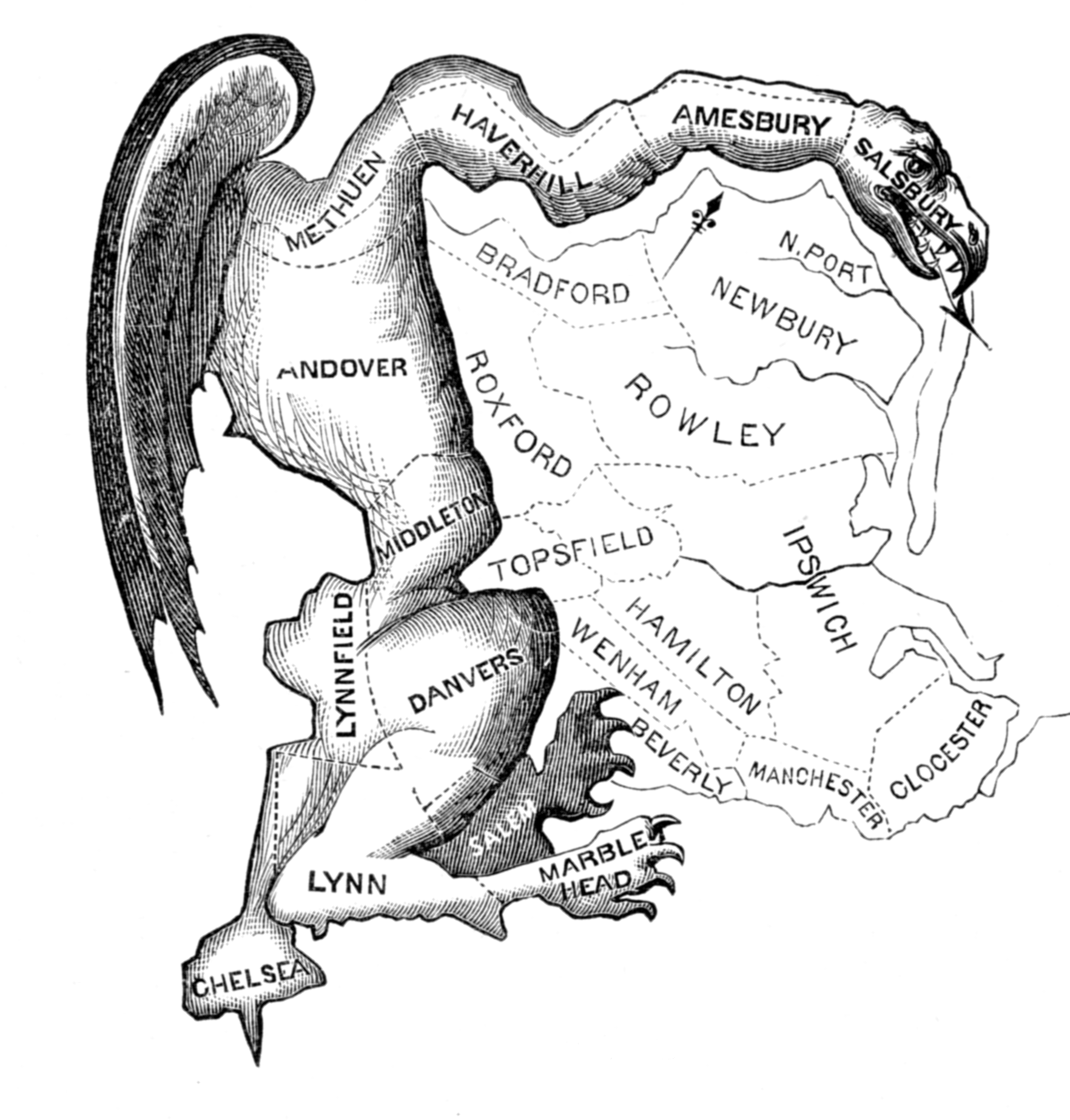 It was 206 years ago last month that the Boston Globe published its scathing denunciation of “a new species of monster … a creature of infernal origin, both from its aspect, and from the circumstances of its birth.” That creature was the gerrymander: a Massachusetts voting district with a sinuous and convoluted shape, drawn by a Democratic-Republican (one party back then, not a combination of two) state legislature hoping to redistribute voters to solidify their majority, and signed into law by Governor Elbridge Gerry. The infernal monster didn’t last long; the very next year, Federalists swept to a huge victory in the Massachusetts legislature (partially because of public outrage over the redistricting), ironically even winning seats within the gerrymander itself. The new legislature was quick to return district boundaries to their former shapes.

The Massachusetts gerrymander lived a short and uneventful life. In fact, following the aforementioned electoral wipeout, the Salem Gazette wrote a satirical obituary for the creature, featuring a picture of its skeleton and the caption, “Hatched 1812. Died 1813.” But the temptation for legislators to redraw districts to their own advantage most certainly did not die in 1813, and has continued in and expanded over the centuries. In our day, advances in computing technology and analytical methods have made us better at gerrymandering than ever. While almost everyone would agree that this practice is unfair and undemocratic, history has taught us that gerrymanders are far easier to hate than they are to prevent.

We now stand at a crossroads. The Supreme Court has recently heard arguments on two major partisan gerrymandering cases, and the rulings they hand down between now and June will have huge ramifications for the nature of America’s representative government. In particular, it will be interesting to watch if and how the Court answers two questions: Exactly what constitutes a gerrymander? And is there an enforceable standard that could be enacted to prevent one?

Politics nerds will correctly tell you that the two main flavors of gerrymandering are so-called “packing” and “cracking”. Packing means stuffing lots of an opponent’s voters into one district, thus isolating their influence to that district; cracking means splitting up a group of voters into several districts, ensuring that they will be a minority in each one. These two techniques give rise to legislatures that do not reflect the total popular vote of those who elected them. For example, the Wisconsin state legislature map (one of the cases currently before the Supreme Court) gave Republicans control of 61% of seats in the legislature following the 2012 election, despite the fact that they only won 48.6% of the vote statewide. That’s a huge margin, and certainly doesn’t sound like representative government. Is that discrepancy enough to constitute a gerrymander?

To answer this question, we have to decide what we mean by a “representative” government. Is a representative government one that proportionally matches the partisanship of its constituents? The ethnicity of its constituents? Their religion? Sexual orientation? Favorite breakfast cereal? Mathematically, you will never get a legislature that is proportionally representative on every characteristic, so you must choose to prioritize some at the expense of others. And then there’s an even trickier question: how much discrepancy is tolerable? In the Wisconsin case, for example, if 48.6% of the vote had gotten Republicans 55% of legislative seats instead of 61%, would that be acceptable? 53%? 49%? At what cut-off point do we transition from statistical noise to partisan power grab? These are just a few of the questions that the Court will have to answer if it chooses to strike down the gerrymandered map.

Then there’s the other case the Supreme Court is looking into: the congressional delegation map of Maryland. Here, as in Wisconsin, there is a disparity between the state’s popular vote and the holders of its seats, this time with Democrats as the perpetrators—Republicans hold only one of the state’s eight congressional seats, despite receiving almost a third of the vote last election. But the plot is further thickened by the fact that Democratic Governor Martin O’Malley openly admits that, in redrawing the map, he and the state’s Democratic Legislature were expressly trying to create boundaries that would ensure Republican Roscoe Bartlett would not be re-elected (and they succeeded).

This case focuses on the intent to gerrymander, rather than the outcome. Here, as before, we face tricky questions. Pretend for a moment that the partisan makeup of the congressional delegation closely mirrored the state popular vote. Would the fact that the the governor openly admits to redrawing boundaries to his party’s advantage in a single congressional race be enough to constitute a gerrymander? And if so, would it require the entire map to be struck down?

As I hope you have realized in reading this, there are no easy answers. I personally hope the Supreme Court strikes down both maps, but I am at a loss for a consistently applicable standard to which future maps could be held. If the Court is able to devise such a standard, we will hopefully enter a new, more truly representative era of American Democracy. With luck, we may soon be able to write a new obituary for the surprisingly-resilient gerrymander: “Hatched 1812. Died 2018.”

Gerrymandering Behind Bars as The Supreme Court Steps In

Susan Collins: Most Likely to Make You Wish You Had Ninety-Nine More of Her in the Senate (Alternatively: Perfect Attendance)